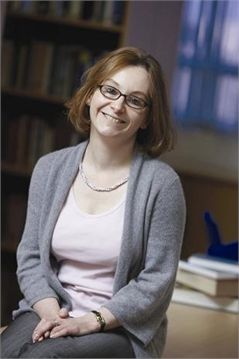 A long time ago, coming from a not so far away country, Emmanuelle joined Aston University as a language assistant. Her desire to become a better teacher spurred her into embarking on a part-time PhD on ‘The Acquisition of French Past Tenses by Anglophone Learners’, while starting an appointment as a teaching fellow.

This got the ball rolling for a long-standing interest in all things verbal. Emmanuelle has extensively published on French tenses, their use and their evolution both on her own and in collaboration. Her research is inspired by authentic linguistic data and she has been a prolific corpus gatherer over the years and has received a number of grants for that purpose. Her current projects include a monograph on the French passé simple, work on the go- and come-periphrases with Professor Jacques Bres (Montpellier 3), a British Academy research project on French in Brussels with Professor Florence Lefebvre (Paris 3, Sorbonne nouvelle) and Dr Anne Dister (St Louis), and she is planning a study of trilingual language acquisition (featuring her son!) with Professor Tijana Asic (Kragujevac / Belgrade).

Emmanuelle is keen to share her passion for languages with colleagues and students alike. Indeed, she has been involved in the Association for French Language Study (of which she is currently the President) since 2001 to promote French in academia, and she has organised over 10 academic conferences at Aston. She also likes to share her research in class, and to make her students budding researchers! At the University level, she was instrumental in the development of the University Wide Language Programme (that she has been heading since 2007) and initiated the launch of Languages for All, a scheme that was shortlisted for the Guardian University Awards 2013.

Texting the Future in Belgium and Québec: Present matters

Developing a pedagogical framework for teaching Chinese aspect markers le, guo, zai and zhe - a comparative study of the Grammar-Translation approach and a communicative approach

The acquisition of French past tenses by tutored anglophone advanced learners : is aspect enough?